Nicknamed “The White City,” Tel Aviv is now a UNESCO World Heritage Site, recognised for its fine examples of Bauhaus architecture. The city is culturally diverse and full of things to see and do, from small museums and funky art galleries to whole neighbourhoods, each with its unique heritage and mixed ethos.

Tel Aviv people are proud of the city’s Bauhaus architecture. Visitors will also appreciate the “international style” and the prevalence of architecture that made the city a UNESCO world heritage site. If you visit the Dizengoff Square, you’ll get a chance to see one of the most prominent examples of this Bauhaus style, the Bauhaus Center, where you’ll find books and postcards showcasing the functional, crisp, and pristine design movement. The centre offers guided tours and audio guides for those who want to learn more about the most significant Bauhaus buildings of Tel Aviv. There’s also a permanent Bauhaus exposition with free entrance for all.

Sometimes referred to as the Museum of the Jewish People, Beit Hatfutsot is a tribute to the Jewish Diaspora. This museum illustrates the life and culture of the Jewish people all over the world, and throughout history. Here you will find a wide variety of exhibits, including film recordings and models documenting the world’s Jewish population throughout the centuries. One of the highlights of the museum is the Bob Dylan exhibit. You’ll also find an excellent children’s section with interactive multimedia displays that help tell the story in terms children can understand. The museum offers guided tours in English every Thursday at 2:00 p.m.

Shuk HaCarmel is Tel Aviv’s largest market. A vibrant area of commerce, the market is a rush of trader activity for selling everything from clothing to spices, electronics, fruit, vegetables, and just about anything you can name. An authentic Middle Eastern-style market, it will captivate you with its sounds, smells, and sights. It is also a great place to go for a foodie experience as it has several restaurants and cafes, as well as food stalls owned by local chefs. You can taste all kinds of Middle Eastern dishes, falafel, grilled meats and meatballs, hummus, kubbeh soup, couscous, and more.

Located in the heart of Tel Aviv, this is an artists’ fair on Nahalat Binyamin Street, and it only opens on Tuesdays and Fridays. Here you can find original, handmade items of just about every description. The market presents arts and craft products by over 200 artists who set up stands in the street to offer their most desirable creations. Visiting this market is an enriching cultural experience as it showcases both traditional crafts and contemporary art trends. You get to meet the artists and even have the chance to engage in meaningful conversations with them. It’s impossible to leave the Nachalat Binyamin Art Fair emptyhanded. This is the place to be if you want to buy gifts and souvenirs and to support the local artist community.

All over the world, graffiti is significant as an outlet for creative self-expression of cultural, social, and political agendas. Nowhere is this art form more interesting or expressive than in Tel Aviv’s Florentin neighbourhood. A short walk along the area’s side streets will present you with some of the most amazing graffiti anywhere. This hipster area of the town will seduce you with murals by established and emerging artists. Don’t forget your camera to capture a few memories of this contemporary cultural experience. 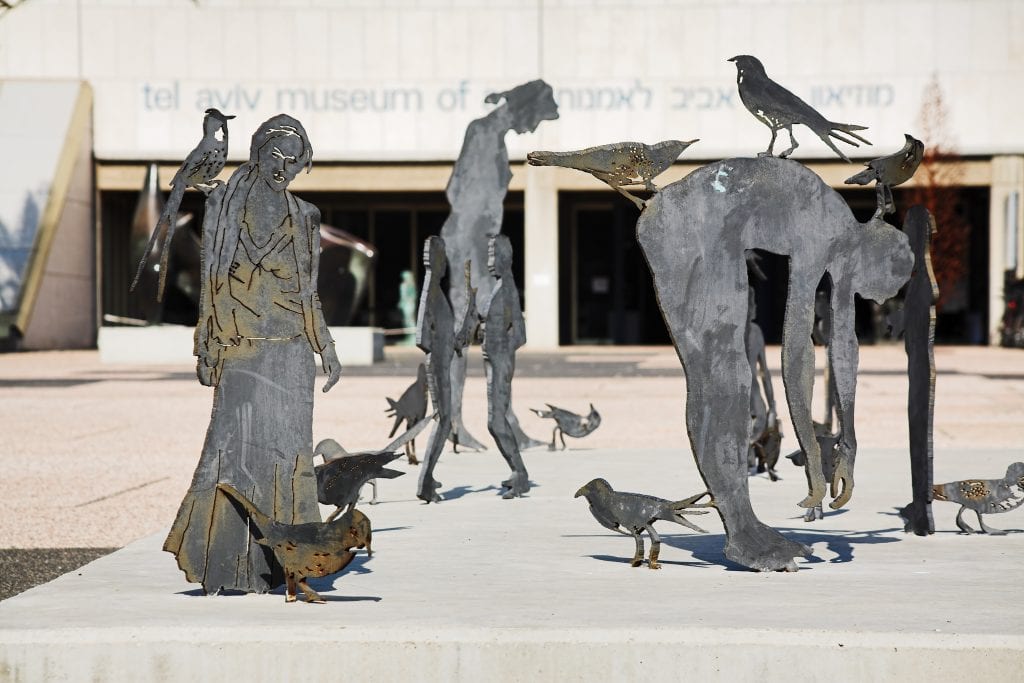 Sculptures of humans and birds in front of the Museum of Art in Tel Aviv, Israel

Considered the cultural hub of Tel Aviv, Habima Square (or The Stage Square) is a significant destination for theatre and music devotees. Many prestigious institutions surround a large, beautifully landscaped public space, which is a favourite meeting place for residents and tourists alike. The Habima Theatre and Heichal HaTarbut are part of the square. Since Heichal HaTarbut is the home of the Tel Aviv Philharmonic Orchestra, you can often catch a concert under the stars here. Sitting on one of the most beautiful squares in the city is rewarding if you want to experience Tel Aviv like a local.

Home to an impressive collection of local and international art, this is the White City’s biggest museum. Housed inside the striking Herta and Paul Amir Building in a beautiful plaza, the museum is next door to Israel’s second-largest theatre and main opera house. The permanent collection at the Tel Aviv Museum of Art includes masterpieces from major art movements, including German Expressionism, Post-Impressionism, Cubism and Fauvism. The museum complex also encompasses the Lola Beer Ebner Sculpture Garden and the Helena Rubinstein Pavilion for Contemporary Art.

An extension of the Tel Aviv Museum of Art, the Helena Rubinstein Pavilion for Contemporary Art presents works by Israeli artists. This extension is in one of Tel Aviv’s smallest but most beautiful parks, Gan Yaakov, steps away from Habima Square. You will find it connected to the Culture Hall that houses the orchestra, just across a small bridge. Locals hang out here under the shade to read books or to contemplate the beauty that lies within these amazing grounds.

Nahum Gutman Museum of Art opened its doors in 1998 in the historic Writers’ Home, which dates since 1887. The museum features paintings and sculptures signed by Nachum Gutman and a section that showcases the artist’s studio. In the new wing of the museum, named after Mori and Ireen Pargament and opened in 2009, you can admire works by young contemporary Israeli artists. There’s also an events hall for up to 70 people and a gift store.

This museum retells the military history of Israel, particularly the origins of the Palmach, an elite part of the Hagana paramilitary organisation. The Jewish community and the Zionist Movement established Hagana in 1920 to defend Jewish settlements from Arab attacks. The Palmach was born on 15 May 1941 as the Hagana’s strike force to help protect the region from the Nazi invasion. After World War II, the Palmach helped bring thousands of refugees and Holocaust survivors to Israel, and it became the backbone of the Israel Defence Forces.

Otherwise known as the Land of Israel Museum, this fascinating experience is associated with the Tell Qasile archaeological site. The complex has a planetarium as well as pavilions with exhibits of ceramics, glass, the history of writing, science, ethnography, and folklore. At the centre of the complex is Tell Qasile where Israeli archaeologists have identified 12 settlement levels dating back to the 12th century BC.

This art museum is in Old Jaffa, in a historic building dating from 1742. It’s an unconventional space curated by Ilana Goor herself – featuring her sculptures and art collected over more than 50 years by the artist from travels in Israel and abroad. The experience is moving and thought-provoking, as Goor designed the space to make a powerful artistic and social statement. Particularly, the “Monk’s Room” serves as the showcase of Goor’s work “The Morning After” with sculptures that evoke the cycle of life and death.

Named after the former prime minister of Israel, the Yitzhak Rabin Centre is the home of the Israel Museum. Here you will find a wealth of information about Israel itself, and about Yitzhak Rabin – who was assassinated by Jewish terrorists after making peace with Jordan in 1995. Highly detailed exhibits to look for during your visit include a multitude of archived films and photographs. Through these visualisations, visitors are transported through Israeli history from the early 20th century. Visitors are also introduced to Rabin from his early years, through his life as a soldier, and then in the government and as leader of the country, right up to his assassination.

All these cultural attractions reveal a lot about the essence of the city, its people, and their lifestyle. Tel Aviv has many other museums, cultural centres, galleries, performing venues, and much more. The cultural legacy of Tel Aviv is an ongoing story.